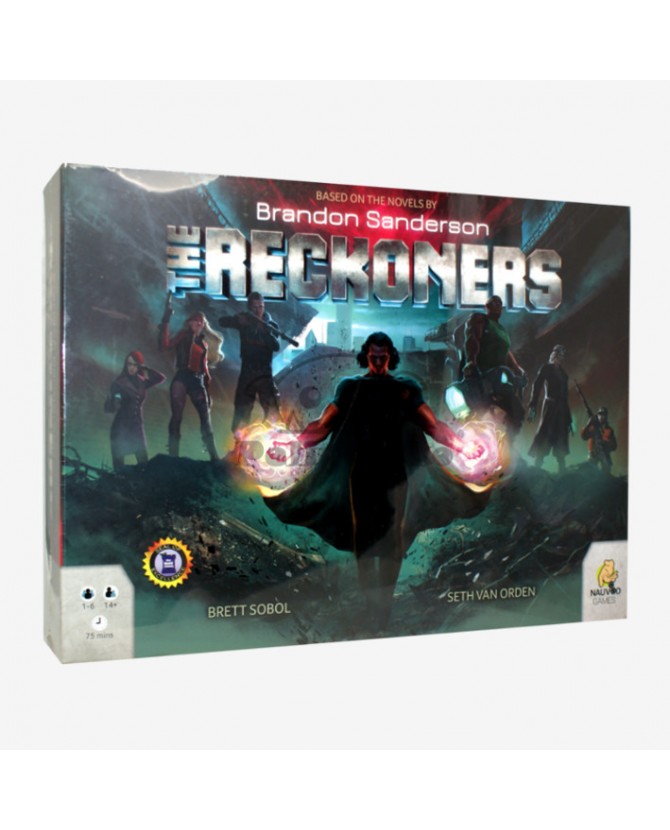 The Reckoners, a game based on the young adult fantasy novels by Brandon Sanderson, allows players to take on the roles of the novels' protagonists and work together to save the world.

Background
10 years ago... A mysterious burst in the sky gave ordinary men and women extraordinary powers. They're called Epics. But, every Epic turned out to be evil. Today, in the city once known as Chicago (now Newcago), an all-powerful Epic named Steelheart reigns supreme!

Nobody fights back... nobody but the Reckoners! This is where you come in. You are a member of the Reckoners, a skilled group of normal humans who assassinate Epics. Your mission is simple, but not easy. Take down Steelheart and his Epics and save the city.

Gameplay
The Reckoners is a simultaneous, co-operative game for 1-6 players that plays in 75 minutes. You win by defeating Steelheart. But before you can defeat him, you must first discover his weakness. Throughout the game, you will work with your fellow Reckoners to research and attack Steelheart, but he is not alone. Numerous Epics are scattered throughout the city, and they will wreak havoc upon the population, if left unchecked. If the Epics manage to destroy Newcago by reducing the population to 0, then all Reckoners lose.

The Reckoners determine which actions to take primarily through a simultaneous, dice rolling mechanism, where each player can keep and reroll results up to three times at their own pace. Equipment Cards and Plan Tokens will also allow you to gain extra actions or improve/manipulate the results of your dice. Actions are resolved simultaneously as well, so communication and collaborative planning are key to ensuring optimal outcomes.

Your dice can be used to attack Epics, research Epics, contain Epics, attack Enforcement, earn money, acquire Plan Tokens, move around the game board, remove barricades, and activate special equipment powers. Researching and Attacking Epics will help you earn valuable rewards, including clues about Steelheart's weakness. But, there will always be more Epics than you, so you have to choose your battles wisely. When all actions have been taken by The Reckoners, then it's the Epics turn.

Each round, all of the Epics are going to activate, performing an array of actions and then powering up to be even more devastating next round. Each Epic also has a unique set of actions it performs, so you're always facing multiple threats that function very differently. The crux of the game is deciding how to resolve these competing threats and prioritize your actions together to eliminate Epics and ultimately win the game. How, when, and where you act will determine your victory or failure.