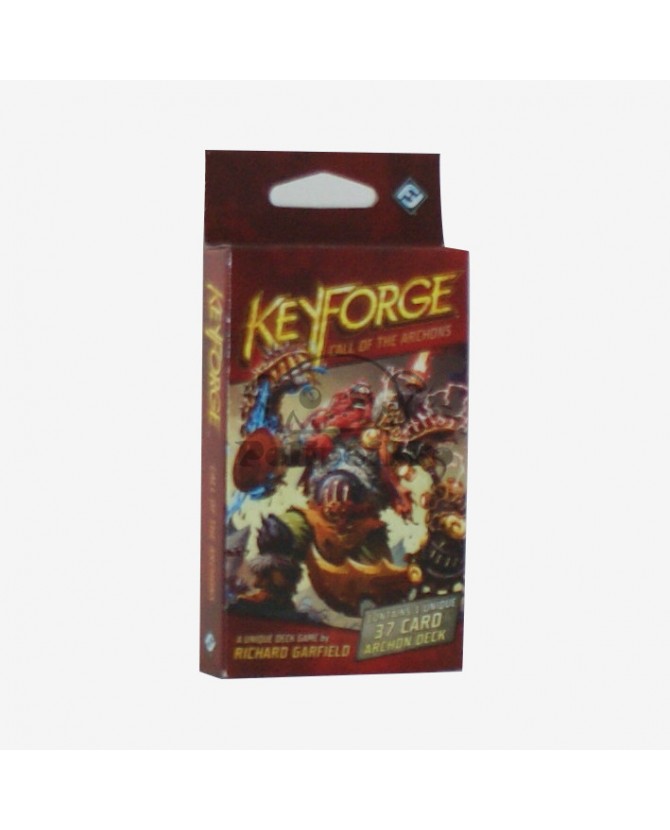 KeyForge: Call of the Archons Deck

From the imagination of legendary game designer Richard Garfield comes a game unlike anything the world has ever seen—a game where every deck is as unique as the person who wields it and no two battles will ever be the same. This is KeyForge, where deckbuilding and boosters are a thing of the past, where you can carve a path of discovery with every deck, where you can throw yourself into the game with the force of a wild wormhole and embrace the thrill of a tactical battle where wits will win the day!

Along with this new breed of game comes a new world: the Crucible, an artificial world built from the pieces of countless planets across the stars. Here, anything is possible. This world was built for the Archons, god-like beings who, for all their power, know little about their own origins. The Archons clash in constant struggles, leading motley companies of various factions as they seek to find and unlock the planet’s hidden Vaults to gain ultimate knowledge and power.

KeyForge: Call of the Archons is the world’s first Unique Deck Game. Every single Archon Deck that you'll use to play is truly unique and one-of-a kind, with its own Archon and its own mixture of cards in the deck. If you pick up an Archon Deck, you know that you're the only person in existence with access to this exact deck and its distinct combination of cards. In fact, in just the first set of KeyForge, Call of the Archons, there are more than 104 quadrillion possible decks!

Every Archon Deck contains a full play experience with a deck that cannot be altered, meaning it's ready to play right out of the box. Not only does this remove the need for deckbuilding or boosters, it also creates a new form of gameplay with innovative mechanics that challenges you to use every card in your deck to find the strongest and most cunning combinations. It is not the cards themselves that are powerful, but rather the interactions between them—interactions that can only be found in your deck. Your ability to make tough tactical decisions will determine your success as you and your opponent trade blows in clashes that can shift in an instant!