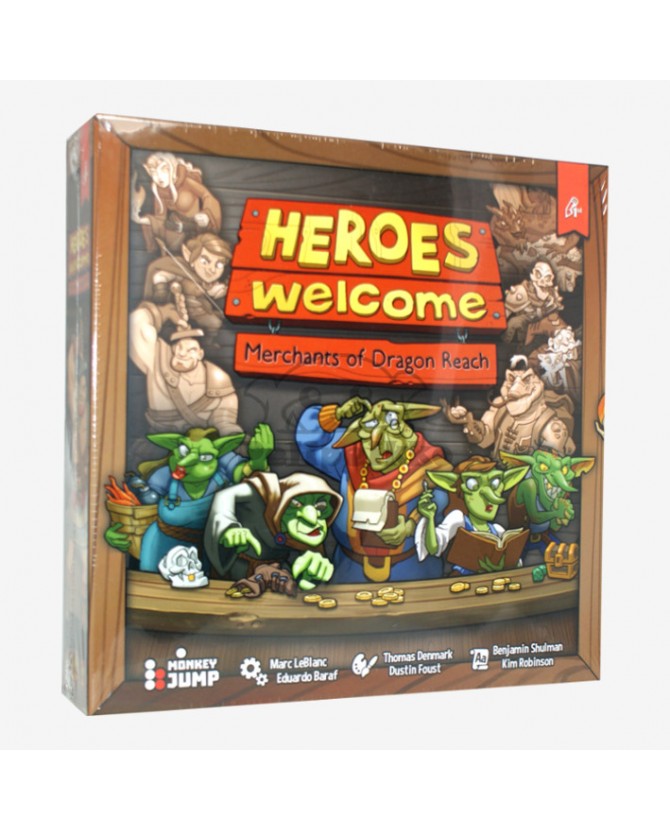 Welcome to Dragon Reach, the bustling new frontier settlement in the Realm of Smiteros. The zone portals have just opened, and as we speak the first heroes are braving the Dungeon in search of fame, glory, and level-ups. Besieged monsters lurk on the outskirts of town looking for opportunities to gear themselves up against their new foes.

For you, this means only one thing: PROFIT! You see, heroes come back with packs full of loot, needing beds and mead and provisions and furry hats. (It’s always furry hats. What is up with that?) And monsters will pay top doubloon for anything that might stop the heroes from coming into their dungeon and smiting them straight to the Nameless Realms. (G’luck with that, fellas!) For the enterprising merchant who can work both ends of the situation, there are stacks of Vorpal to be made. But you won’t be alone. Other merchants are here, moving in on your territory, trying to make the same quick piece of shiny that you are. Competition is the heart of commerce. Or something.

When the boss monster finally goes down, whoever has the most Vorpal Pieces wins! (I saw that carved in a table at the Merchants’ Guild, so it must be true.)

Gameplay
The game is played in a series of rounds, and each round is separated into two phases:

1. Town Phase - Players will take turns running Shops, working in the Guildhalls, and crafting artifacts. When the round ends after one player calls for it, the Heroes leave town for their next Dungeon Crawl.

2. Dungeon Crawl Phase - The Heroes enter the Dungeon to defeat enemies and level up, receive Loot, and while this is happening you and your cohorts are preparing the town for their "triumphant" return. The Heroes finish by arriving at the Town Gate with backpacks full of Loot and gold, ripe for the picking. This starts the next and round with a new Town Phase.

The player with the most VPs at the end of the game (after the Boss encounter) wins!