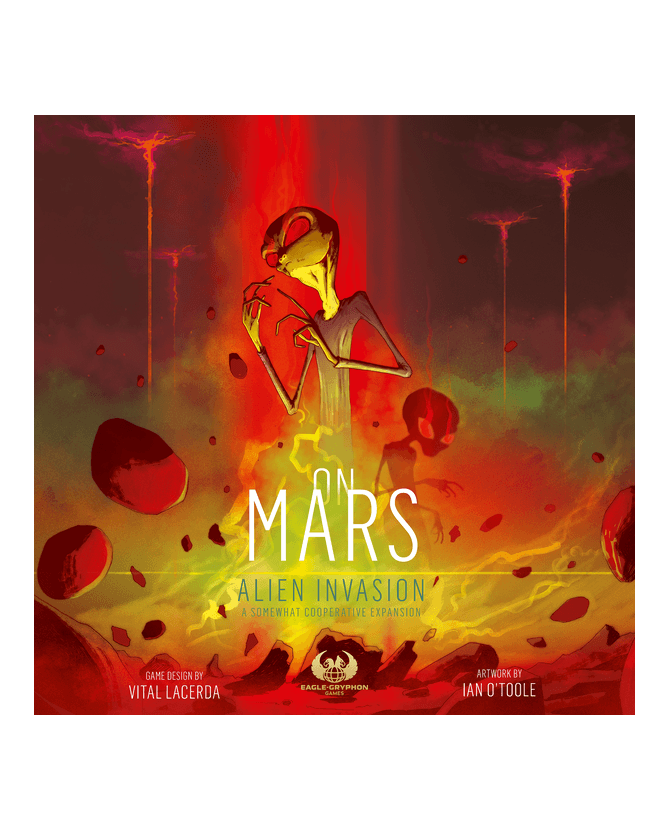 On Mars: Alien Invasion is the much-anticipated Somewhat Cooperative Expansion to Vital Lacerda’s best-selling and highly-rated On Mars base game. Though this expansion was originally going to be named Surviving Mars, Eagle-Gryphon Games made the decision to change the name to On Mars: Alien Invasion to better reflect the theme and content of this expansion. The game narrative is contained in four chapters of a story written by Nathan Morse. Gameplay contains four new and different ways to expand upon and play the base game. You will play one versus many; completely cooperatively; and even solo if you wish, depending on the chapter. Included are four fresh and completely replayable ways to establish colonies On Mars!

For instance, here is the narrative that opens the first chapter and sets the stage for all of the following action:

Alert! Sensors indicate that aliens are invading the famous red planet! Long have the conspiracy theorists predicted this. The threat to your mission is too great; you must take action. Will you be able to prevent the infectious spread of these beings bent on expanding to every habitable planet in the galaxy? Or will you play for the other side, a species trying to establish a colony on Mars, blithely oblivious to the danger their expansion represents, unaware that there are others out there eager to keep humans “where they belong” on Earth.
—description from the publisher

On Mars: Alien Invasion is a short story expansion to On Mars made in 4 chapters with 4 different modes of play.

The short story is called Alien Invasion and contemplates the following Chapters and modes of play: