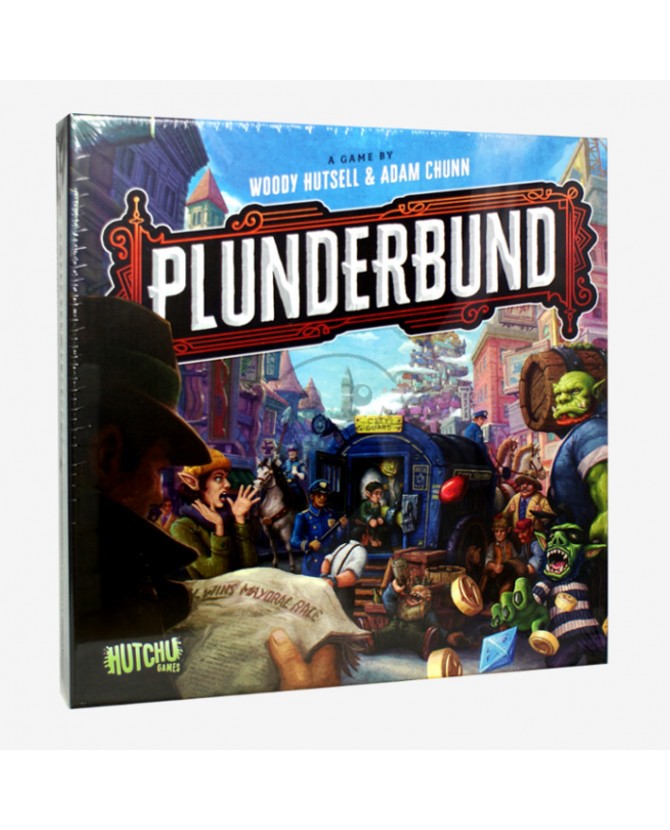 You lead a guild striving to dominate the market for illegal goods in the Sprawl, a city rich in history and lawlessness. Recruit and task an army of agents, racketeers, spymasters and others to build your reputation by selling your goods and causing chaos for your rivals. Through a light deck building mechanism you attempt to create the strongest network of agents, racketeers and the most desirable black market goods. Winners and losers are determined by a fun, yet sophisticated, supply & demand mechanic.

Plunderbund combines the innate corruption and profiteering of prohibition Chicago and the lawlessness of the fantasy setting, the Sprawl.

It's an era before cell phones, e-commerce and customer relationship management tools, an honest guild had to get business the hard way: thieving, sorcery, money laundering and bribery.

Plunderbund is your chance to lead your guild to fame, fortune or disaster as you navigate the whims of the notoriously picky Sprawl consumer and deal with underhanded tactics from rivals determined to steal your business.

Each player will lead a guild with the power to decide where your finite resources are invested. A light deck building mechanic enables you to acquire and improve your black market goods, add agents, add racketeers, disrupt your rivals’ operations or just wreak havoc. Cards are added to your deck through a simple snake draft from a limited selection of over twenty different recruits.

Your guild gains reputation (VPs) as a sophisticated yet simply implemented supply and demand mechanic helps you sell your black market goods to merchants. At the end of the game you will be compared to your rivals on the strength of your network of agents, number of racketeers and black market goods qualities. All this growth comes at a cost, you have to take favors as you try to build your operation without the benefit of any gold in your coffers. As they say “paybacks are hell”. Fail to payback your favors and you pay the price as you see your reputation diminished at the end of the game.

Over the course of twelve months, divided into four seasons, you will build your reputation on the backs of your guild recruits and their abilities.