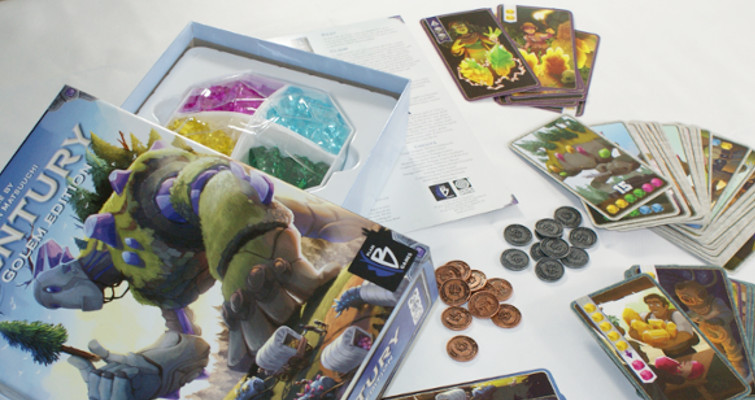 Within the realms of Carvania golems and humans live together in a harmonious society. Made from enchanting, rare soul crystals they walk amongst their creators, tall and mighty, ready to serve as workers. In this world you will do well for yourself as a crystal trader, but can you be the savviest merchant of them all?

20th Century Golem Edition is a new visual take on the original Spice Road version. The mechanics are exactly the same but the theme, art style and components are quite different. The spices have been swapped with crystals, and the markets are replaced with golems. The only other visual difference is that the cards feature the crystals they provide on them, but this of course has no impact of the game play.

In this game players will compete to gain the most points, which are obtained from the golem cards they can claim, as well as the coins they may collect in this process. The golem cards each require a certain set of crystals before you can claim them. There are 4 types of crystals – yellow, green, blue and pink, yellow being the least valuable and pink the most. All 4 types are needed for the golem cards, so it’s not merely a matter of getting the most valuable ones. In some cases it may even pay off to trade 1 high value crystal for multiple of a lesser value. 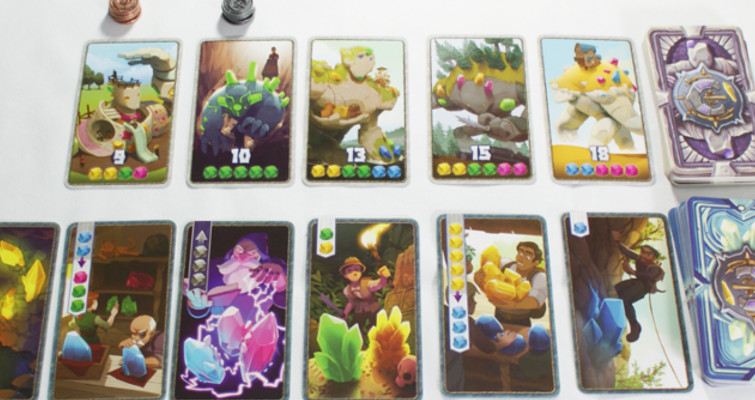 During a turn a player can either take, play or claim a card, or gather back cards already played to their hand. The cards depict actions players may take, such as trading or obtaining crystals. As example, a card could feature a yellow and a green crystal, or the option to transform 3 lower value crystals into 1 higher value one. Cards are presented to players in a row and are initially free to take, but if taking any other card than the first one available in this row, a gem must be placed on each card that is skipped. If taking a card with 1 or more crystals left on it that player gains both the card and the crystals on that card. When a player has claimed 6 golem cards the game will end after everyone has had a turn the points are then counted. The winner is the one with the most points. 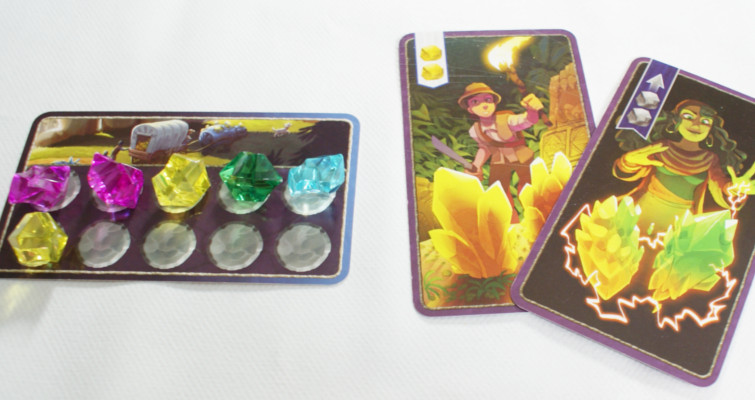 This game has been called a “Splendor killer” due to its similar game mechanisms, but although the 2 do share similarities the strategy for each game is different. The complexity level is about the same. In the end it is of course down to personal opinion.
20th Century Golem Edition offers beautiful artwork and components. It’s a great gateway game, but also fun for the more experienced players. It works well for both groups as you can make it simple by making quick impulsive choices, or more strategic by planning more ahead and keeping an eye on what others are going for. With its 2-page rules it’s also very fast to learn and easy to teach to others. Whether the preferred choice is the spices version or this golem one, it is a nice, fun game.